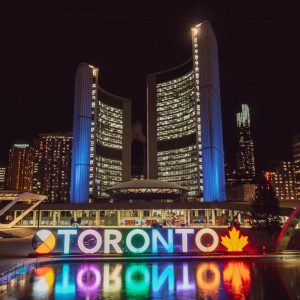 Toronto is taking another step towards normal, as part of Ontario’s Roadmap to Reopen plan. As of Friday, July 16th, and if nothing goes wrong, the city is going to enter phase 3 of the plan, which is the final phase before a complete return to routine. Tourist attractions will be permitted to reopen in larger capacities, and hotels are going to be allowed to operate their recreational areas. Indoor cinemas will open their doors once again as well, and so will restaurants, bars, dance clubs and pubs (under some conditions).

All this means a much more optimistic projection for Toronto’s summer tourism season, and it is mainly thanks to the efforts made by the city’s tourism industry to ease restrictions, so as not to miss out on another summer of revenue. That’s why if you still haven’t picked your summer vacation destination yet, Toronto is definitely worth considering.

There’s plenty to see and do in Toronto and its surroundings, from a climb up the CN Tower, to a stroll through the city zoo and aquarium. However, seeing is not always enough. These tourist hotspots usually have some fascinating and less-known stories behind them. Here are a few that might surprise you.

What on earth is a CN Tower?

Let’s start off with what is probably Toronto’s most famous landmark, and one of the most famous tourist destinations in Canada. The CN (Canadian National) Tower was built between 1974-1976, originally meant to be a part of a hustle-and-bustle area by the Toronto Harbour. Its basic purpose was to serve as a telecommunications and radio hub, since reception in Toronto in the ‘60s was far from ideal, due to the many new buildings decorating the city’s skyline. In fact, the restaurant and rooftop view were not in the original plans.

Built in an abandoned railway depot, the plans for the area were scratched, leaving the poor old CN Tower pretty much isolated from all other points of interest. Today, this neighbourhood is mainly residential, and things worked out for the tower as well since it attracts more than two million visitors each year. That is, except for the past year or so, since it has been closed, but it is due to reopen (once again, if nothing goes wrong), in about a week. The tower holds some respectable records, the most known of them being the tallest structure in the world until 2007, when it was surpassed by the Burj Khalifa in Dubai. Less known is the fact that it holds the tallest metal staircase in the world, with almost 2,600 steps, and the highest wine cellar in the world.

Toronto offers hundreds of different accommodation options, but if you want to splurge and you’ve got the budget for it, check out the St. Regis hotel, part of the tower under the same name. If we’re already speaking of tall towers, this is Toronto’s third tallest structure at just a bit over 270 meters. Even if you’re not into spending 400 GBP per night on lodging, a visit to the spa or one of the several bars on premise can certainly give that ‘good life’ vibe.

Originally, this tower was called the Trump Tower Toronto, but both the city and the hotel have made efforts in recent years to obliterate any memory of the former American President. This building actually started out as a challenging real estate investment by fellow Canadian entrepreneurs Alex Shnaider and Val Levitan. In fact, other than his name, Donald Trump was not involved in the planning and execution phases – but when St. Regis entered the picture, they insisted on erasing any link to him anyway.

The site was purchased in 2004 for around $28 million by Shnaider, Levitan and some other minor investors, but construction began only in 2007 because of several bureaucratic and legal setbacks, including objection on behalf of neighbouring properties to the building’s plans. Shnaider, through his company Midland, took care of the financial aspects, while Levitan, through his developing and managing company Talon International Development, handled all of the operational aspects of the project.

After a 2-year delay and an additional investment made by Shnaider, the hotel was finally opened in 2012 – but did not do too well over the years. One of the main reasons was the fact that Trump’s name received very bad publicity in Canada, due to some of his political statements. After countless legal battles between investors (and with residents), and even reported conflicts and arbitration between the hotel owners and the Trump Organization, it was sold in 2017 and eventually became a member of the St. Regis family.

Oh, and here’s a bonus fact: About two minutes’ walk from the hotel, you can find the Rocky Mountain Chocolate Factory, a chocolate haven not known to many, but one of the best in Canada in our opinion.

What a strange name for a bookstore

We know, buying books on vacation is not a very common pastime, but The Monkey’s Paw is no ordinary bookstore. Located in the western part of the city, it specializes in books that are, well, odd and unordinary. Keeping with this line of oddity, the opening hours are also eyebrow-raising – don’t count on a visit before 11 am or on Mondays, for example.

However, the thing that really attracts hundreds to this bookstore daily is the “Biblio-Mat”, a type of vending machine that will give you a book for only 3 CAD. The catch here is that the choice made by the machine is entirely random, so you really don’t have a clue what you are about to get. Nevertheless, 3 CAD is certainly a catch – and that is after the price was raised from 2 CAD recently.