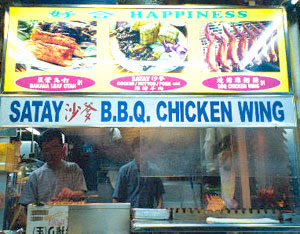 While Singapore certainly has a reputation for expense, the city’s restaurants offer some of the most varied and affordable food in the world. Mixing the best of Malay, Indian, and Chinese cuisine, the food on offer in Singapore’s street-level dining establishments and outdoor restaurants is varied and exciting – just what any food obsessed tourists lives for.

We took a look at the city’s ubiquitous ‘hawker stands’ – large, table-filled, inexpensive food centres found on just about every major street corner. The ‘stands’ are similar to the food courts found inside most shopping malls, offering a selection of Singaporean treats and delicious meals. What separates them from food courts, however, is the immense quality of the dishes on offer.

Catch the MRT to Singapore’s infamous Bugis district and you’ll run into several such centres, with the largest located in front of the district’s large hotel spread. Dishes are available from four dollars, making the Bugis area eateries one of Singapore’s premiere budget food corners. Venture down the street to Clarke Quay and you’ll be hit with a variety of high-end restaurants and luxurious bars.

Chinatown is another obvious choice, although its selection of Malay foods is rather lacking. The historical district is located to the east of Bugis, and is accessible by MRT from Singapore’s central district. Eateries throughout Chinatown range dramatically in terms of quality and style, with basic dished available from just $2. Higher-end restaurants will typically charge around $30 per person.

Singapore’s population is food obsessed, leading to an impeccable level of quality throughout the city. While our recommendations cover the city’s leading food spots and budget cuisine locations, they’re certainly not all the city has to offer. For true Anthony Bourdain styled cuisine exploration, spend an evening browsing the city’s back-street eateries and taste-testing inexpensive dishes.