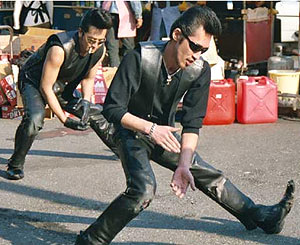 Snuggled into Japan’s fashion capital in Harajuku is Yoyogi Park – a large relaxation area offering all a tired traveller could need. Known internationally for the bizarre costumes on display and the public martial arts classes, the park is thought of as Tokyo’s natural fashion runway. Every Sunday, without fail, the park is filled to the brim with cosplayers and wannabe fashion models.

It’s an occurrence that, outside of Japan, would inspire bizarre stares and a bevy of cameras. But in this strange pocket of cosmopolitan Tokyo, walking through the park in a gothic costume is normal to the point of being bland. Yoyogi Park is truly an sight to behold, with a sea of creative costumes on display for the entire city – boasting a popular of over thirty million – to see.

But there’s more to the Yoyogi area than just unusual costumes. The district is part of Japan’s large fashion industry, housing cutting-edge brands and the country’s more classic houses such as Issey Miyake. While Akihabara represents the centre of Tokyo’s gigantic technology markets and vibrant computer culture, Yoyogi is the nation’s capital of fashion and bizarre visual innovation.

It’s also the home of Japan’s first flight, performed in 1910 by the country’s early military. Now it’s a reminder of Japan’s difficult economic past – throughout the edges of the park, a series of camps are erected, offering residence to Tokyo’s large and almost completely accepted homeless population. In a city renowned for its wealth and productivity, Yoyogi is a reminder that things can sometimes fail.

If the city has become too much for you, think of Yoyogi Park as an alternative to a lengthy trip to the outskirts of Tokyo. It’s central, yet remarkably fresh and tolerable. Given the bizarre costumes on display throughout the weekend, this is one destination you can’t afford not to see while in the world’s most exciting and interesting capital city.