Dublin Airport has said that American Airlines will operate a new Dublin-Dallas Fort Worth summer service, starting from June 2019.

The daily service will be Ireland’s first direct flight to Dallas, American’s largest hub for connecting traffic. It will improve connectivity from Ireland to Texas and also to a large number of onward destinations in the United States and Latin America. American Airlines will operate its new daily Dallas service with a Boeing 787-9 Dreamliner in a 285-seat three-class configuration, with 30 seats in Business, 21 in Premium Economy, and 234 seats in Economy.

‘Dallas is an excellent addition to the existing route network from Dublin Airport and we’re delighted that American Airlines will be serving this market with a daily summer service from next year,’ said Dublin Airport Managing Director Vincent Harrison. ‘This new route will further grow tourism and trade between Ireland and the US, and we look forward to working closely with American to promote the new service on both sides of the Atlantic,’ Mr Harrison added.

‘Connecting Dublin with Dallas Fort Worth provides Irish travellers with direct access to the largest hub of American, the world’s largest airline,’ said Vasu Raja, American’s Vice President, Network and Schedule Planning. ‘This is the first time Ireland and Texas have been connected with a direct flight and the new service will meet the increased demand for travel between both markets. From Dallas, Irish travellers can connect onto top onward destinations including Hawaii, Las Vegas, Cancun, Los Angeles and New Orleans.’

Dublin Airport’s 17th US destination, Dallas will be the first city in the South Central region of the United States to have a direct service to Ireland.

United States based airlines American Airlines and US Airways have announced today that they have merged to create the world’s biggest airline.

A possible deal was first considered last August, when American began looking at a suitable merger while under pressure from its creditors. The company has been reorganising since late 2011 and has been under bankruptcy protection. Under the new deal it is believed that American Airlines creditors will own 72 percent of the company, and the shareholders of US Airways Inc will own the balance.

Assuming that the deal gains the necessary approval from the US bankruptcy courts, passengers on the two airlines are not expected to notice any difference to the relative services in the near future. However, the new entity will wield considerable resources in the US and world aviation markets, with combined hubs in Charlotte, Philadelphia, Phoenix, Dallas-Fort Worth, Chicago, Miami, New York and Los Angeles. Between them, the two companies can muster a total of 900 airplanes that can operate 3,200 daily flights, and will employ 95,000 staff. The complete integration of the two giant companies is expected to take years.

Four US airlines, American, United, Delta and Southwest, control almost 75 percent of all US air travel.

American Airlines, an airline subsidiary of US-based holding company, AMR Corporation, will be introducing its new Boeing 777-300ER aircraft for service to London Heathrow Airport in the UK, from Dallas Fort Worth in the US, from January 31, 2013.

The new Boeing 777-300ER aircraft will be equipped with lie-flat seating, aisle access for all passengers, Wi-Fi capability and 15.4-inch TV screens. The airline will be taking delivery of 10 Boeing 777-300ERs by the end of 2012. The planes will be offering three-classes of seating, including First and Business Class seats, and Main Cabin Extra.

The airline is taking advance bookings for the three-times-daily London to Dallas flights on the new aircraft, with immediate effect.

The airline will be expanding to a fourth daily service between London and Dallas from June 14, 2012.

Earlier, Virasb Vahidi, the airline chief commercial officer, said, ‘American will be among the first in the industry to offer the combination of fully lie-flat seats with all-aisle access, international Wi-Fi, and top-of-the-line in-seat entertainment.’

The airline has also announced that it is relocating its check-in facilities at Heathrow Terminal 3 from June 1, 2012. The airline Main Cabin (Economy) passengers will have to check-in at Zone F, and First and Business Class passengers at Zone G. Advantage Platinum, AAdvantage Gold, oneworld Ruby and oneworld Sapphire loyalty programme members in Economy class will be able to check-in at Zone G of the terminal building.

The airline has reported, however, that its exclusive Flagship Check-In for First and Business Class passengers will continue to remain at Zone H, where members of AAdvantage Executive Platinum and oneworld Emerald passengers will also be able to use the facilities. 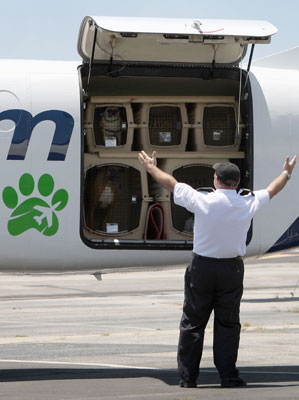 Last week’s American Airlines puppy disaster has prompted an evaluation of how airlines treat and handle pets. The airline has been blamed for the death of seven puppies, all of which were stored in the aircraft’s pressurized and temperature regulated cargo hold. It’s raised some serious questions for those of us that prefer to travel with pets, most obviously – which airline treats animals safely?

American Airlines has spoken directly to several media outlets, claiming that it recommends owners of short-nosed animals such as puppies or young kittens avoid flying with their pets. Due to changes in pressure and temperature while at air, many animals can develop breathing problems while in the storage area of a commercial airliner, leading to discomfort and occasional death.

Surprisingly, it was low-cost airline JetBlue that topped recent polls of satisfaction amongst travel gurus and pet owners. The survey, carried out by online pet website PetFinder.com, covered major commercial airlines throughout the United States. JetBlue was ranked highly due to its treatment of animals and limited fees for small household pets, particularly cats and dogs.

Taking a slightly less convenient first place was PetAirways, a speciality airline built for pet owners and animal breeders. The airline does not offer travel to humans, instead housing only animals in its fleet of specially designed and furnished planes. Animals travelling on the airline are granted toilet breaks and individual caged areas inside the plane’s primary cabin.

While the levels of comfort on offer inside a PetAirways cabin are unparalleled, they do come at a significantly higher price to that offered on standard commercial airlines. Animal organisations are treating JetBlue as the airline of choice for household pets and smaller animals, giving the airline a recommendation for its humane treatment and spotless animal safety record.